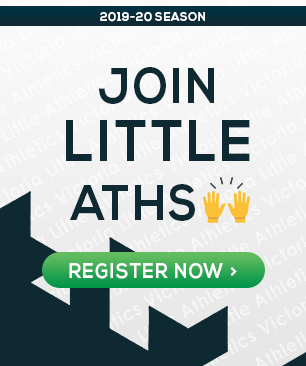 The WLAC started competition at Western Port SecondaryCollege in 1981 with around fifty athletes. After two seasons at the college the WLAC moved to the Hastings foreshore area. This period of the Centre's history was one of growth. Saturday morning competitions were so visible on the foreshore that membership rose to around 180 athletes. With this growth came strength and energy in the parents and committees; the club logo was designed in this period, reflecting the WLAC's Western Port Bay location and often strong Navy family membership base.

With only a 300m track, average standard jump pits and no concreted shot or discus rings, the foreshore was a track and field in need of work. After considerable effort by members of the Centre, a commitment was received in the late 1980s to upgrade the facility. The upgrade was to involve revamping the running track and increasing it from 300 to 400 metres, and having the track reversed in direction. New jump pits were to be constructed and even the shot-put and discus rings were to be concreted.

During the works the Centre relocated (for one season) to the Royal Australian Navy training facility (HMAS Cerberus) in Crib Point.

Westernport was one of the first Little Athletics Centres to introduce a Multi-Event Open Day in the form of a Pentathlon competition. These were very popular events and commenced at Cerberus.

After only a few years at the upgraded facility, a change in funding and policies saw a government rationalisation of sporting facilities. This rationalisation, whilst controversial and poorly timed from our Centre's point of view, was in the long term to be a positive thing. The outcome was a return to Western Port Secondary College in 1996. The Centre had input to the design of the facility we have now.

These grounds and building facilities are in a leasing arrangement with the Mornington Peninsula Shire and managed through a Local Management Support Group (LMSG). Representatives of the users of the facility - Westernport Little Athletics Centre, Westernport Dog Obedience Club, Westernport Soccer Club and the Western Port Secondary College make up the LMSG.

As our Honour Roll shows, the Centre has a very strong performance history with records and recognition at all levels of competition. At the State level, records have included Kristy Rollinsonâs effort of setting two new State Records as an under 14 in high jump and long jump and in winning Gold in the triple jump (88/89). The following season in the under 15's Kristy again set a new state record in the high jump winning Gold for her efforts.

Australian records and standards are few and far between at any club. We were privileged to have Christine Van Enk in the Under 10's setting an Australian Girls record in 60m hurdles with a time of 10.40 seconds (92/93).

Some of our former athletes have also progressed to success in older and senior ranks.Â  Sarah Klein represented Australia in the marathon in the 2014 Commonwealth Games and 2015 World Championships.Â  In 2019 Aiden Hinsen broke the 30 year old U16 Australian triple jump record, and months later won gold in the U18 Oceania Championships.Â  He started learning technique on the club's old gravel jump runways and was on hand to open the new synthetic runways with their first jump in 2018.Â

Interestingly, the club had been very strong in race walking with athletes competing at state level regularly.Â  Gordon Loughnan feels that this has to do with the fact that a number of the coaches, and their children, have been strong in this discipline.

The strength of the Westernport Little Athletics Centre has been and still is in its members, the children, their families and friends. The Centre runs entirely on volunteers who commit their time to ensure each season is a successful season for the kids. This strength and commitment to the Westernport Little Athletics Centre is recognised by a Seven-year Service Award for Athletes and a Life Membership Award for Ordinary Members (parents and helpers).